One of the significant composers of the Romantic era, Robert Schumann (1810-1856) started out with ambitions of becoming the greatest pianist in Europe. A hand injury led him to focus his efforts on composition. Initially, Schumann wrote exclusively for piano, but under the encouragement of his wife Clara, herself an accomplished musician and composer, he branched out to compose symphonies, an opera, choral and chamber works. His fourth symphony was completed in 1841, but remained unpublished and was heavily revised a decade later. Schumann’s No. 4 is a widely interpreted piece, frequently subjected to modifications in tempo, orchestration, and expression by conductors – making every live performance of the piece a unique experience.

Putlizer Prize-winner John Adams (1947- ) is often described as a minimalist composer, but his work can rarely be confined to a single style. He began experimenting with electronic music more than forty years ago, and in 2003 composed The Dharma at Big Sur for solo electric violin for the grand opening of the Walt Disney Concert Hall in Los Angeles. A tribute to the Central Coast, Dharma features a huge range of percussion instruments, including a set of tuned gongs, keyboard samplers, and even two flower pots.

Click here to hear The Dharma at Big Sur > 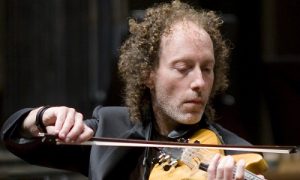 Lauded by BBC Radio as “the greatest living exponent of the electric violin”, Tracy Silverman’s groundbreaking work with the 6-string electric violin defies musical boundaries. Formerly first violinist with the innovative Turtle Island String Quartet, Silverman was named one of 100 distinguished alumni by The Juilliard School. The world’s foremost concert electric violinist, Silverman has contributed significantly to the repertoire and development of the 6-string electric violin and the non-classical stylistic approach he calls “21st century violin playing”. A long-standing advocate for music education, Silverman is an in-demand clinician and on the string faculty at Belmont University in Nashville, TN.