Joaquín Turina (1882-1949) was born in Seville, and much of his work shows the influence of traditional Andalusian music. His best known work, Danzas fantásticas was composed in 1919 and was inspired by the novel La orgía by José Mas, with quotes from the book printed on the score.

Joaquín Rodrigo (1901-1999) is best known for his guitar music, despite the fact that he himself never mastered the instrument and was instead a virtuoso pianist. Rodrigo lost his sight to illness as a child, and composed his works in Braille. Concierto de Aranjuez is his best known work.

The works of Roberto Sierra (1953- ) have been performed by some of the world’s most prestigious symphony orchestras. In 2017 he was awarded the Tomás Luis de Victoria Prize, the highest honor given in Spain to a composer of Spanish or Latin American origin. Sierra’s “Folias” concierto is a masterful set of variations for guitar and orchestra set to La Folia, the mesmerizing chord sequence used by composers for centuries.

A master of orchestration, Russian composer Nikolai Rimsky-Korsakov (1844-1908) originally conceived Capriccio Espagnol as a composition for solo violin with orchestra. Instead, the finished piece is purely orchestral, and demonstrates a variety of interesting techniques. Rimsky-Korsakov himself said of Capriccio Espagnol, “The Spanish themes, of dance character, furnished me with rich material for putting in use multiform orchestral effects” – such as in the fourth movement, when violins, violas and cellos imitate guitars, with the parts marked “quasi guitara”. 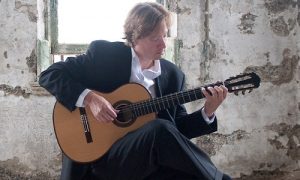 Grammy-winner Jason Vieaux, “among the elite of today’s classical guitarists” (Gramophone), is the guitarist that goes beyond the classical. NPR describes Vieaux as “perhaps the most precise and soulful classical guitarist of his generation.” His most solo album, Play, won the 2015 Grammy Award for Best Classical Instrumental Solo. In 1992 Vieaux was awarded the prestigious GFA International Guitar Competition First Prize, the event’s youngest winner ever. He is also honored with a Naumburg Foundation top prize, a Cleveland Institute of Music Alumni Achievement Award, and a Salon di Virtuosi Career Grant..