Aaron Copland (1900-1990) is well known for his highly accessible, melodic compositions that helped define the sounds of American music. In El Salón México, Copland captures the liveliness and complexity of the country he frequently visited in the 1930s. The melodies, based on Mexican folk music Copland picked up in his travels, evoke an imaginary dance hall in Mexico City and the variety of people to be found there.

Two-time Pulitzer Prize winner Samuel Barber (1910-1981) was one of the most popular and celebrated American composers. His Violin Concerto, completed in 1939, gained rapid popularity and quickly become one of the most frequently performed concertos of the 20th century.

Michael Daugherty (1954- ) is one of the most performed American composers working today. His Strut for String Orchestra was inspired by the legendary actor and civil rights activist Paul Robeson, famed for his rendition of “Old Man River” in Showboat. The vigorous rhythms of Strut reflect echos of the 1920s Harlem Renaissance.

Perhaps the best known American composer in the second half of the 20th century, Leonard Bernstein (1918-1990) helped bridge the gap between classical and popular music. Bernstein composed in numerous styles, creating music for everything from ballet and chamber music to Broadway musicals and choral works. His score for On the Waterfront perfectly encapsulates the tension and melancholy hope of the classic 1954 film.

Click here to hear Suite from On the Waterfront > 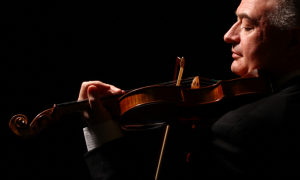 Described by the Gramophone as a “magician, bewitching our ears” for his hauntingly beautiful sound, flawless command of the instrument and mesmerizing phrasing, Ilya Kaler is the only violinist to win the Gold Medal at the Tchaikovsky Competition in Moscow (1986), the Sibelius Competition in Helsinki (1985), and the Paganini Competition in Genoa (1981). Kaler is considered to be one of the most outstanding personalities of the violin today whose career ranges from that of a soloist and recording artist to chamber musician and professor.